Archive at will, but please provide a link back to my site at www.foxsongfiles.net.

Thanks to MaybeAmanda, whose imagined Joyce quote inspired it, and who graciously performed Lightning!Beta.


"Buffy the Vampire Slayer" TM and copyright Mutant Enemy and its related entities. All rights reserved. Neither this work of fiction nor its author are authorized by Mutant Enemy.

Summary: The life of people! The sheer aliveness of them!

She was loading the dishwasher after dinner when the thought came to her, quite unbidden, that it was really for the better that her mother hadn't lived to see her come to this. "But honey," she could hear the dear, familiar voice saying, as clearly as if Joyce had been standing at her elbow, "what's wrong with live boys?"

A sound escaped her, something that might once have been a laugh; across the kitchen she saw Dawn glance up for a moment from her homework. Just for a moment -- Dawn had stopped asking questions once she'd understood that Buffy had no answers. Now she turned the page and Buffy watched as she pretended to study, slowly worrying the eraser on the end of her pencil between her teeth.

Buffy reached toward the counter for another plate, but her hand fell short. She couldn't take her eyes from Dawn, from her dark hair falling, smooth and glossy, across her face; from the slow, unstudied grace with which her slim fingers reached up to tuck the trailing locks back behind her ear. She seemed to glow beneath the lamplight. Buffy took a breath and turned back toward the dishes.

The life of people! The sheer aliveness of them! She found herself staring at people on the sidewalks, in stores, behind the wheels of the cars beside her at traffic lights. People fascinated her. People enthralled her. People were completely innocent of how wondrous it was just to see and hear and move and breathe. She remembered that she'd been just like that too, all unknowing, when she was one of them.

When she was one of them. What she was now, she didn't know.

She reached out again, and watched her fingers grasp the edge of the china plate, watched as her hand carried it to the sink, held it beneath the stream of warm water rushing from the faucet, and then placed it neatly upright in the dishwasher's rack. As long as she just watched, the simple actions of living didn't seem so foreign. It was when she tried to feel them, to inhabit this body the way she knew she was supposed to, that she was overwhelmed. It was as if her soul, having once been freed of it, had forgotten how to wear this mantle of flesh and blood and bone. She wasn't sure if it was worth the effort of relearning.

In the mornings, when this body woke -- when she woke, she corrected herself -- it was clearest. It was almost within reach again. She would keep her eyes closed and lie very still, remembering, almost feeling, the love and light and peace and completeness, but inevitably she surfaced, struggling against the air that forced its way into her lungs, against the daylight that burned her eyes. Every morning the world rushed to remind her that she was, against her wishes and her better judgment, alive.

She turned off the water. She closed the dishwasher and twisted the knob to begin the cycle. They'd meant well, of course, she chided herself; they'd only acted out of love. Of course they couldn't understand what they'd done. Of course they didn't know how they'd doomed her.

The sharp rap at the door startled her. Her fingers clutched at the edge of the counter; her lungs snatched a deep sudden breath. Her head jerked around in time to see Dawn look up, unhurried and unafraid, toward the door. Outside on the porch, framed in the opening of the screen door, Spike met her eyes and inclined his head in greeting. "Evening, Buffy. Little Bit."

Buffy exhaled and sagged against the counter. "Spike," she sighed, almost under her breath, but it was Dawn who said, "Come on in, Spike."

He pushed the door open and stepped into the bright kitchen, shrugging his shoulders as if to shake off the darkness. His long black coat reminded Buffy of a shroud. "You almost ready?" he asked her. "Thought I heard a bit of unrest on the way by the Bronze. Could be an interesting night."

She realized that he was staring at her. "Let me get my things," she said, and turned away, and went into the hallway toward the closet. She opened the door, and pulled a coat from a hanger, and picked up the first stake that came to hand from the box in the corner. She hefted it, trying the grip, and couldn't remember a time when such a thing had seemed strange.

She straightened up and tucked the stake under her belt. "Let's go," she said as she came back into the kitchen, pulling her coat over her shoulders.

Dawn looked up from her textbook and put down her pencil. "Will you be back to drive me to school in the morning?" she asked.

"I..." Buffy paused at the door beside Spike, and felt his hand settle on the small of her back. "I think so. I'll try. Unless, like, all hell breaks loose like it does on a weekly basis."

"No prob," Dawn said coolly. "Cause, you know, I could ask Tara. I was just wondering."

There was no answer to that. Dawn had already picked up her pencil and resumed her perusal of Important Epochs in European History. "I'll try," Buffy repeated weakly, because it was all she could do, and because it was the truth. "Night, Dawnie."

"Night," Dawn answered without looking up, and turned the page. "Have fun."

"Thanks." Beside her Spike snorted under his not-quite-breath, and she elbowed him as they went out the door into the darkness.

"What?" he asked as they crossed the lawn, but she didn't answer. "What was that all about?"

"Nothing," she said, a bit sharply, and strode ahead of him. The night air was cold and crisp in her nostrils, and she drew in a long deep grateful breath of it. Her hand tightened around the stake at her belt. "It was nothing. Come on. Let's go kill something." 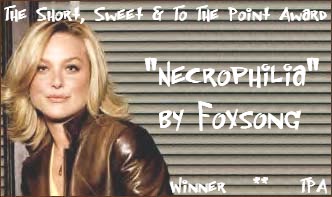